It never occurred to me that I wouldn’t finish. Ever.

But that’s exactly what happened 23 hours 66.7 miles after I started running the first annual Eastern States 100, which took place August 15-16 in central Pennsylvania.

It’s so disappointing. Depressing even.  I came home today and unpacked.  Looked at the training plan on my frig. The giant course map on my wall. Six months of hard core work. Over 1500 miles of running and more than 125,000 feet of climbing. Airplane tickets, hotel rooms, rental cars.  And I dropped. Argh!

The course was beautiful, in places you would say magical. But also extremely technical. Like nothing we have out here in California.  I don’t think I can describe it but I’ll try.

Picture rocks, rocks, and more rocks, of all shapes and sizes. Big ones, small ones. Rocks that make you fall. Rocks that break your toes.  Then place those rocks on the steepest longest mother f-er of a decline you can picture. Say over 1000′ feet in about a mile. Then take the trail on that decline with those rocks and make it about 12-24 inches wide. Next, turn that course on an angle so that your legs are jacked up. Now run for 100 miles. That’s Eastern States 100.

Oh wait. That’s not all.  You need to run up. A lot. On hard-as-nails technical inclines.  Fortunately, I was ready for those. I had spent almost every weekend running steep hills for hours on end to prepare. Between those horrible, no good, very bad, technical stretches were breathtaking stretches or rolling meadows, old farm houses, and forest.

Connecting all of that were world class aid stations with the best volunteers I have ever seen in ultrarunning.  Every aid station was filled with sounds of, “Here comes a runner!  Runner. You. Are. Awesome. What can we get you?  We are here to get you fueled up, rested and back on that course.  You, runner, are amazing.”   The aid stations had fire pits at night, bacon and eggs in the morning, soup, pancakes, and all the food and drink you can imagine.  Simply incredible.  Because the course was so tough, even the close aid stations took runners hours to reach and the excitement, warmth, love, and help at each one really did make a world of difference.

The medical crew was also great.  They told us at the pre-briefing that they would check in on us but wouldn’t be obnoxious about it. Their goal was to make sure we were safe, not to pull us from the course.  They did just that. I had medical check on me at every aid station after the 50K mark, and they were terrific. Professional, quick, not intrusive. I felt safe in their hands, and I think that’s the point.

The race is put on by Craig Fleming, a well respected local RD who has the perspective that it’s all about the 200 runners who toe the line.  His #1 goal — really his only goal — is to help those runners get from aid station to aid station to the finish. He has a no nonsense approach.  He is a trail runner putting on a trail race for other trail runners.  This attitude permeates the event and I think the runners really appreciate the environment he has managed to create.

Craig and his team spent hundreds of hours clearing the trails. They were in amazing shape.  They also took a lot of care in marking the course. I don’t know a single person who got lost or even wandered off trail, which is saying something because these trails are deep in the woods and often cover creeks and boulder areas.

What happened to me is simple. The trail beat me.  At 23 hours I wasn’t tired. My legs weren’t sore. My mind was sharp. My sense of humor in tact.  All my training paying off in spades.  But my knee struggled with the technical nature of the trails — the one thing I couldn’t really prepare for — combined with the massively steep down hills.  I believe I tweaked my right knee in the very beginning while I tried to figure out how to run or even power hike on the worst sections. Early on, I found myself in a pack of runners far more experienced.  I tried to stick with them, thinking I could do it.  I slipped. I stumbled. I tripped.  I finally pulled over, let them pass, and slowed way down to figure out what the Hell I was doing.

I was really strong for a long while and enjoying myself to no end.  Scott (my boyfriend, crew chief and pacer) GoPro’d me at every aid station he could and I was in great spirits, smile on my face, having a ball.  However, at each aid station you hear me say, “My leg is hurting a bit.  Can you give me the BioFreeze?”

I pulled out of Halfway House, mile 51, in 7th place with a big smile on my face.  I had made it through the worst of the climbs and it was now dark, which I really enjoy.  But between 51 and 61, I fell apart. There were two huge down hills.  The second made me stop cold. Every step caused a massive stabbing pain on the inside of my right knee. By mile 60, I couldn’t even run the flats.

This is the part, mile 51-61, that I will remember the most. Not because of the pain but because of the other runners.  It’s one of the joys of the sport we all love so much. A runner came up behind me.  I offered to get out of his way. He replied, “I don’t care how slow you are. I just want company.”  We stuck together through a massive rock-filled climb on a shallow trail, and the subsequent killer down.  We talked about the course and enjoyed the night sky.  We stopped to check on another runner sitting on the side of the trail.  We asked if he was OK.  He was. He just decided he was not going to climb any more. We understood and we laughed, but not too hard.

I came into Slate Run at 60.9 (1:00AM), mentally feeling solid, physically feeling strong.  But then there was my knee, which was piercing with pain.  I was shaking and my eyes were tearing up with frustration. I found Scott and Jen (my friend, pacer, and a member of the race committee) and told them I thought I was done.  I couldn’t run.  They were in shock.

Scott worked on my knee for 20 minutes.  He taped it up like a professional. Everything felt better, except for a very specific spot on the inside that hurt like Hell every time he touched it.  I was afraid I was going to ruin it for good. He checked with medical, first asking them if I could be causing long term damage, and then convincing them I could push on since I had given birth to two kids at once. I could endure pain.

I really didn’t want to go out on my leg any more. I also didn’t want to quit. I didn’t want to disappoint myself or Scott or anyone else. So with my reinforcements supporting me, I gave Scott a kiss, got Jen and we took off.

Sadly, the race was over. It took Jen and I 2.5 hours to go 5 miles. Yup. And I still had 33 miles to go. So at the next aid station we called it a night (4:00AM).  Surprisingly, we had a ball those 5 miles.  OMG. Jen was so funny.  It was sooooo refreshing to be talking to someone after basically running 60 miles alone.  We both knew almost immediately I couldn’t make it out of the next aid station. Once we realized that it was over, we just took our time through the “ALGERINE WILDS!!!” <insert spooky voice and scary music>. It was the most fun I had all day (night).

I think it was the right decision, but I really don’t know. I couldn’t walk for a solid day.  Took about 48 hours to be able to bend the knee.  But today, one week later, it’s fine.  We followed the RICE method and it seems 99%. We even went to TRX tonight.  So is it OK because I stopped when I did or is it OK because it wasn’t as bad as I thought.  I think it’s because I stopped and took care of it vs. running (walking) another 14 hours. I hope so. I hope I did the right thing.

We took a little video just about 8 hours after dropping. Click on the image to watch. 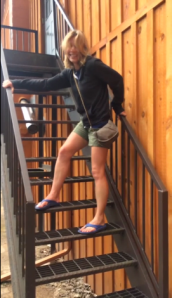 My plan is to come back next year and try again.  I can’t say how much I loved it.  World class event.  Amazing beauty. Scott is all for it, which is important.  I’m not sure I’d want to do these crazy adventures without him.  We were going to retire, but now we aren’t. We are already working on the training plan. Lots and lots and lots of downs.

Congratulations to the Eastern States 100 team.  You put on an amazing event.  Simply best in class.  Can’t wait to come back and try again.